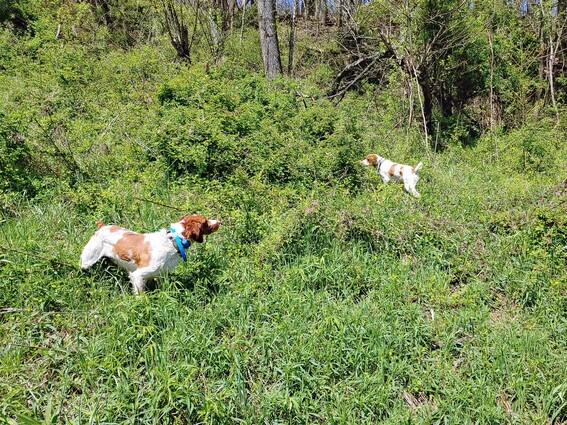 We offer bird dog training services for a limited number of clients each year who have purchased pups from our kennel. We limit the number of dogs we accept into our program to ensure each dog receives ample attention. Dogs are accepted on a first-come, first-served basis. During training we encourage as many visits as possible, but we will also send videos of progress. We do encourage in-person pickup of dogs once they complete training so we can demonstrate what the dog has learned.

Basic Training Philosophy:
An important foundation for all of our training is that we use positive reinforcement and no correction when teaching new behaviors. That is, when initially teaching a dog new behaviors like come, heel, crate, fetch and whoa there is no correction--the dog is simply rewarded for performing an approximation of the correct behavior. These rewards are then gradually tapered to only occur for closer approximations of the desired behavior until finally the reward only occurs when the exact behavior is performed. This positive approach engenders an eagerness to learn and boldness that is potentially lost if the dog is intimidated into learning new behaviors and commands.
Of course, correction is eventually incorporated into training but only after the dog has learned what is expected. When correcting, it is important to use the least amount necessary to effectively guide the dog's behavior. This will differ from dog to dog. For example, when using an e-collar some dogs are so sensitive they only require the vibrate function (the collar just vibrates with no shock) for correction whereas others require the "nick" function (shock) paired with vibration before the vibration becomes an effective correction. Also, it is necessary for the correction to be completely predictable so that the dog learns it can control the correction with its own behavior.
Keeping these simple principles in mind leads to a cooperative relationship between the trainer or handler and the dog. It can be tremendously rewarding to see the light bulb come on for a young dog as it figures out its job. However, it does take considerable effort and time to properly train a bird dog, and it is important to keep in mind that the dog is not simply an appliance used for hunting birds but rather a partner you are working with toward a common goal. As such, there is value in keeping all training as positive as possible.
Of note, an exception to the positive reinforcement approach described above is the forced retrieve in which the dog learns to avoid an aversive experience by performing a certain behavior (negative reinforcement). For this reason, we do not use the forced retrieve procedure until a dog is at least one year old and has completed all other aspects of its training. While the forced retrieve can be highly effective when done properly it may not be necessary depending on the dog and the owner's expectation for retrieving.